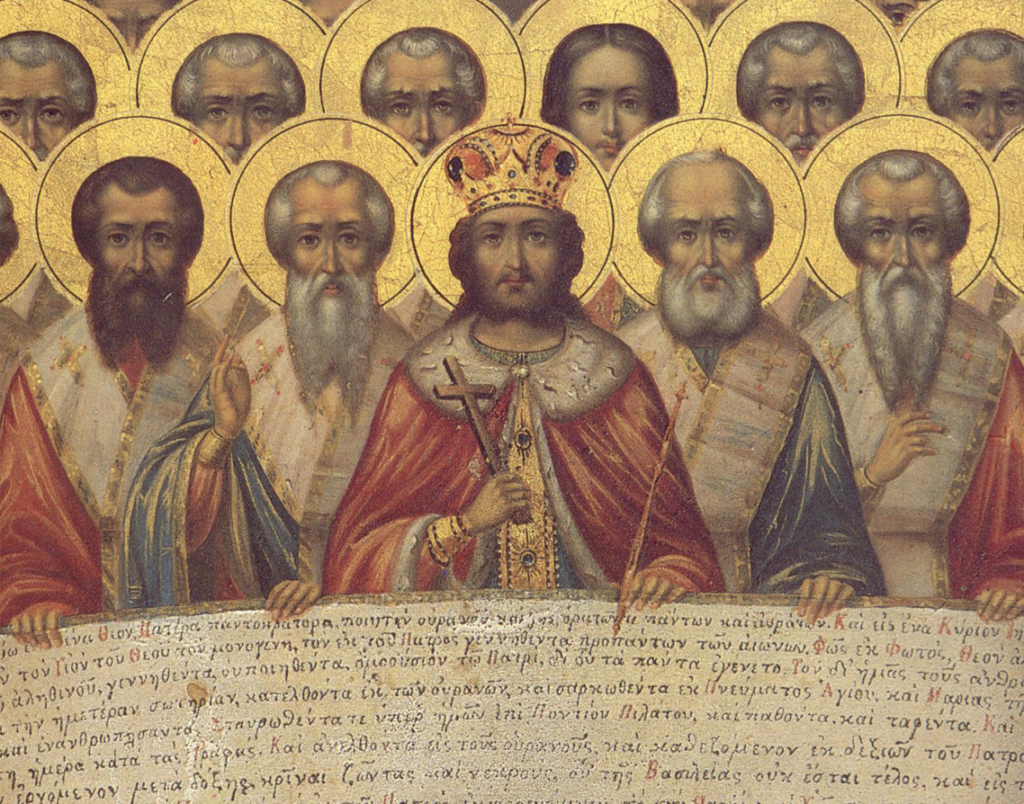 God With Us & God For Us: Christology Through the Centuries

The study of Christ (Christology) expands upon a simple yet elegant line from George Herbert that captures two essential features of the Christian teaching about Jesus Christ: “In Christ two natures met to be thy cure.”*

The second feature is the work of Christ. The Lord took on the form of a servant to be our “cure.” By subjecting himself to the frailties and temptations of our condition and yet remaining without sin, he condemned sin in the flesh, undoing the consequences of sin. In his incarnation, obedience, death, resurrection, ascension, and future return, Jesus Christ accomplished redemption. We see that God is for us in the work of Christ.

Let’s ponder the astonishing truth that, as the Nicene Creed eloquently states, the Son of God “for us and for our salvation came down from heaven and became incarnate by the Holy Spirit and of the Virgin Mary, and was made man.” The Nicene Creed, the cornerstone of orthodox Christian belief, attaches saving significance not only to Christ’s death and resurrection but also to his incarnation and birth.

Christians celebrate that Jesus Christ is God with us and God for us. Christian theology explores the abundance, capacity, and immensity of Christ’s tender and powerful love for us. It explores His sovereign rule as Lord and King. The person and work of Christ have very personal implications for us. Those same implications are also comprehensive for all creation. The Lord delights in showing mercy to us. He is making all things new.

Examples of these points are found all throughout the Christian tradition.  Here are three examples:

It was of supreme importance that He who was to be our Mediator should be both true God and true man. If the necessity be inquired into, it was not what is commonly termed simple or absolute but flowed from the divine decree on which the salvation of humanity depended. What was best for us our most merciful Father determined. Our iniquities, like a cloud intervening between Him and us, having utterly alienated us from the kingdom of heaven, none but a person reaching to Him could be the medium of restoring peace. But who could reach to Him? Could any of the sons of Adam? All of them shuddered at the sight of God. Could any of the angels? They had need of a superior, by connection with whom they might adhere to God entirely and inseparably. What then? The case was certainly desperate if the Godhead himself did not descend to us, it being impossible for us to ascend to Him. Thus, the Son of God took it upon himself to become our Emmanuel, i.e., God with us; and in such a way, that by mutual union, His divinity and our nature might be combined; otherwise, neither was the proximity near enough, nor the affinity strong enough, to give us hope that God would dwell with us; so great was the divide between our lost state and the spotless purity of God.

Had humans remained free from all corruption, they were of too humble a condition to approach God without a Mediator. What, then, of human- ity’s true state, when by fatal flaw they were condemned to death and hell, defiled by sin, made loathsome through the curse, in complete and utter despair? It is not without cause, therefore, that Paul, when he sets forth Christ as the Mediator, distinctly declares Him to be man. “For there is one God,” he says, “and there is one mediator between God and men, the man Christ Jesus” (1 Timothy 2:5). He might have called Him God, or called Him man; but because the Spirit, speaking through him, knew our infirmity, he provides for it by the most appropriate remedy: setting the Son of God familiarly before us as one of us.

Jesus is the only high priest of all, and the only king of every creature, and the Father’s only supreme prophet of prophets.

The three miserable consequences introduced by sin—ignorance, guilt, and bondage to sin—required Christ to fulfill three roles for us . . . Ignorance is healed by Christ the Prophet; guilt by Christ the Priest; the tyranny and bondage to sin by Christ the King. Prophetic light scatters the darkness of error; the merit of the Priest takes away guilt and procures a reconciliation for us; the power of the King removes the bondage of sin and death. The Prophet shows God to us; the Priest leads us to God; and the King joins us together and glorifies us with God. The Prophet enlightens the mind by the Spirit of illumination; the Priest by the Spirit of consolation tranquilizes the heart and conscience; the King by the Spirit of sanctification subdues rebellious desires and emotions.

This blog post has been adapted from my new book, God With Us: 365 Devotions on the Person and Work of Christ.