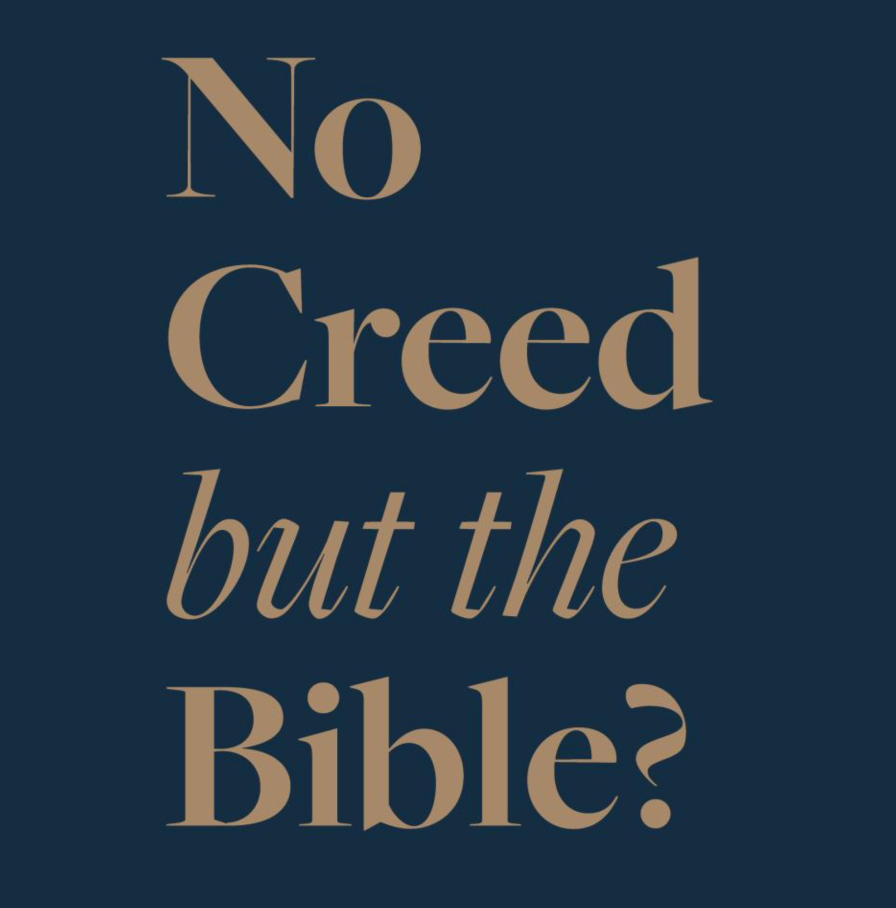 No Creed But the Bible?

The so-called fundamentalists of our day join hands with liberals on this point with their well-known slogan: “No creed but the Bible”.

Tradition is the fruit of the Spirit’s teaching activity from the ages as God’s people have sought understanding of Scripture. It is not infallible, but neither is it negligible, and we impoverish ourselves if we disregard it.

J. I. Packer, “Upholding the Unity of Scripture Today”

Obviously, Christianity did not begin when we were born. Nor did our generation invent Christian thought. We live two thousand years removed from the time of our founder, and—for better or for worse—we are the recipients of a long line of Christians’ insights, mistakes, and ways of speaking about God and the Christian faith. Today’s Christianity is directly affected by what earlier Christians chose to do and to believe.

The fact that Christianity developed—that the sixteenth century, for instance, looked very different from the third, and that both looked very different from the twenty-first—can sometimes lead us to wonder what the essential core of Christianity is. As a result, some people decide to ignore history altogether and try to reconstruct “real Christianity” with nothing more than a Bible. But this approach misses a great deal. Christians of the past were no less concerned with being faithful to God than we are, and they sought to fit together all that Scripture has to say about the mysteries of Christianity—the incarnation, the Trinity, predestination, and more—with all the intellectual power of their times. To ignore these insights is to attempt to reinvent the wheel, and to risk reinventing it badly.

Thankfully, the church of the past has given us a wealth of creeds, councils, confessions, and catechisms. These are tools that the church has used to speak about God clearly and faithfully, to guide its members closer to God, and sometimes to distinguish authentic Christianity from the innovations, heresies, and false teachings that the New Testament warns of. While their purposes differ, all try to communicate complex theological ideas to people who do not have sophisticated theological backgrounds (in some cases, to people who are illiterate).

Once sola scriptura is properly understood and the divine authority and sufficiency of Scripture are established, we should appeal to the church’s ministerial authority (the theological statements from the tradition) as very useful tools. John Calvin writes: “Thus councils would come to have the majesty that is their due; yet in the meantime Scripture would stand out in the higher place with everything subject to its standard. In this way, we willingly embrace and revenrence as holy the early councils, such as those of Nicea, Constantinople. Ephesus 1, Chalcedon, and the like, which were concerned with refuting errors—in so far as they relate to the things of faith” (4.9.1).

What is a Creed?

Some of the most important creeds in the Christian tradition are the Apostles’ Creed, the Nicene Creed, the Chalcedonian Definition, and the Athanasian Creed.

The English word “creed” comes from the Latin word credo, which means “I believe.” Church historian J. N. D. Kelly says that a creed is “a fixed formula summarizing the essential articles of the Christian religion and enjoying the sanction of ecclesiastical [church] authority.” More simply, the creeds set forth the basic beliefs of the church that have been handed down from earliest times, what the New Testament calls “the faith that was once for all entrusted to God’s holy people” (Jude 3). When teachers throughout history called parts of this faith into question (usually the parts that were taken for granted or were less well-defined), the early church reaffirmed the essentials in a way that honored the traditional teaching.

The earliest creeds are arguably to be found in Scripture itself. In the Old Testament, what is known as the Shema (“Hear, O Israel: the Lord our God, the Lord is one,” Deut. 6:4) is a creedlike statement. While there are no official, full-blown creeds in the New Testament, scholar Ralph Martin has suggested that the beginnings of creeds are already present in the New Testament and were developed by early Christians to defend against subtle pagan influences and to establish key beliefs. Many scholars believe that Paul recites an early creed in his letter to the Corinthians when he summarizes the facts that he taught as “of first importance”: “that Christ died for our sins according to the Scriptures, that he was buried, that he was raised on the third day according to the Scriptures, and that he appeared [to the apostles and many others]” (1 Cor. 15:3 – 7). Furthermore, in the church’s acts of baptism, Eucharist, and worship, certain prayers and early creedlike statements of belief were developed, such as “Jesus is Lord” (1 Cor. 12:3) and the Trinitarian baptismal formula of Matthew 28:19: “in the name of the Father and of the Son and of the Holy Spirit.” While there is no formal creed in the pages of Scripture, the idea of a central, basic teaching of Christianity certainly is.

After the age of the apostles, the early church possessed what is known as “the rule of faith” or “the tradition,” which theologian Bruce Demarest describes as “brief summaries of essential Christian truths.” Early church fathers such as Irenaeus, Clement of Alexandria, Tertullian, and Hippolytus all assume this “rule of faith,” an unwritten set of beliefs that had been passed down from the apostles and taught to Christian converts. In the second century, Irenaeus described the rule of faith in this way: “One God, the Creator of heaven and earth, and all things therein, by means of Christ Jesus, the Son of God; who, because of His surpassing love towards His creation, condescended to be born of the virgin, He Himself uniting man through Himself to God, and having suffered under Pontius Pilate, and rising again, and having been received up in splendor, shall come in glory, the Savior of those who are saved, and the Judge of those who are judged, and sending into eternal fire those who transform the truth, and despise His Father and His advent.”

Irenaeus’s rule of faith sounds quite similar to later formal creeds and contains the essence of the gospel. As the early Christian com- munity dealt with new heretical movements, the rule of faith gave birth to more precise statements of the essentials of the faith, such as the Apostles’ Creed and the Nicene Creed.

How Were Creeds Used?

In individualist cultures, we pick and choose what religion we like. More than that, we sometimes combine parts of different denominations or religions to make something entirely new — whatever works for us personally. For the early Christians, however, creeds were meant to be used by groups—not just a summary of what everyone in the room agrees upon but a promise made and kept as a group.

Creeds were initially used in baptism, during which the baptismal candidate recited a formula or responded to questions, thereby publicly confessing belief in Jesus Christ. As time passed, however, the creeds also were used to teach new converts the basic elements of the Christian faith. Since the creeds were relatively short summaries of Christian doctrine, they were easy to learn. The creeds were also used in church liturgies (the set of actions and rituals in a worship service that illustrate Christian beliefs and mysteries), uniting the congregation in common confession. Far from being a device of the ivory tower, creeds were the way that ordinary tradesmen and farmers could learn about and pledge their lives to the God of the Bible.

Nowadays, we have a largely literate population and an ample supply of Bibles, and so it’s easy to wonder whether creeds are necessary. Some may even think that the creeds stand in opposition to (or at least in tension with) the authority of Holy Scripture. However, as theologian John Webster says, “We may think of the creed as an aspect of the church’s exegetical fellowship, of learning alongside the saints and doctors and martyrs how to give ear to the gospel.”6 Creeds are not dogmas that are imposed on Scripture but are themselves drawn from the Bible and provide a touchstone to the faith for Christians of all times and places.

Just You and Your Bible?

What are we to make of the role of a human church in creating written documents about God? Are we better off relying on the sense that we ourselves can make of the Bible or the experiences that we have?

Even the finer points of Christian theology come out in our worship and lives. The humanity and deity of Jesus, the Trinity, the trust that we know we can put in Scripture are all beside us in our services on Sunday and impact the way we honor God in our daily lives. And if that’s the case, then we ought to tackle high theology the same way that we tackle sin and the needs of the Christian community—as a body of Christ, using the parts of the body that are best suited to the task. The various creeds, councils, confession, and catechism from the traditions of the church are the fruit of parts of the body that God gathered to proclaim and explain his gospel, stretching nearly two thousand years into the past.

Seeing the theological statements of the church as specific instances of the Christian act of confession is significant because it helps us remember that they are not solely about doctrine and theology; they are ultimately about worship. Lest we think that fine points of doctrine and the minutiae of theological debate are merely intellectual exercises, the fact that confession is about praise helps ground the way that we view and use these documents.

Additionally, learning about and knowing creeds, confessions, catechisms, and councils is important so that we do not repeat the mistakes of the past or exhibit our natural tendency for, as C. S. Lewis dubs it, “chronological snobbery.”

Learning how Christians throughout history have wrestled with the tough questions of our faith gives us a valuable perspective that deepens our understanding of the Christian faith, increases our dependence on God’s revelation in Jesus Christ and Holy Scriptures, fuels our worship of God, increases our love for each other, and motivates mission to the world.

For more information regarding creeds, confessions, and councils, see Know the Creeds and Councils.