Why We Wrote A Children’s Book 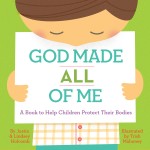 Get our new children’s book, God Made All of Me: A Book to Help Children Protect Their Bodies.

God Made All of Me is a simply-told, beautifully-illustrated story to help parents talk with both boys and girls about their bodies and to help them understand the difference between appropriate and inappropriate touch. It allows families to build a first line of defense against sexual abuse in the safety of their own homes. Our goal is to help you in protecting your child from sexual abuse.

Why is this book important?

Most victims of child sexual assault know their attacker. According to the U.S. Department of Justice,  34.2 percent of assailants were family members, 58.7 percent were acquaintances, and only 7 percent of the perpetrators were strangers to the victim.

What do parents need to know about child sexual abuse offenders?

Although strangers are stereotyped as perpetrators of sexual assault, the evidence indicates that a high percentage of offenders are acquaintances of the victim.

Most child sexual abuse offenders describe themselves as religious and some studies suggest the most egregious offenders tend to be actively involved with their faith community.

Dr. Anna Salter, a sexual offender treatment provider, says it is important for parents and child-serving organizations such as churches to avoid “high risk situations.” This is because “we cannot detect child molesters or rapists with any consistency” and thus “must pay attention to ways of deflecting any potential offenders from getting access to our children.”

Victor Vieth, senior director and founder of the Gundersen National Child Protection Training Center, writes: “Many youth organizations have prevented the abuse of children in their care simply by limiting the access of potential offenders to boys and girls. Child abusers count on privacy to avoid detection of their criminal behavior. When churches or other faith institutions remove this privacy it becomes more difficult for the offender to succeed.”

Why is it so important to teach personal safety to children?

Victor Vieth explains: “Personal safety education involves simply telling children that the parts of their body covered by bathing suits are not supposed to be touched by others and, when they are, they should tell someone. If the person they tell doesn’t believe them, they should keep on telling until they are believed. In addition to teaching the children personal safety, it is important to provide instruction to the parents so that they can reinforce these lessons at home and will know how to respond if a child makes a disclosure. Many teach fire safety, school crossing safety, or even swimming safety and yet bristle at the thought of personal safety designed to empower children to protect themselves against offenders.”

Why is it so important to Christian to be educated about the issue?

Dr. Anna Salter, a sexual offender treatment provider, writes: “If children can be silenced and the average person is easy to fool, many offenders report that religious people are even easier to fool than most people.”

Salter quotes a convicted child molester: “I consider church people easy to fool . . . they have a trust that comes from being Christians . . . They tend to be better folks all around. And they seem to want to believe in the good that exists in all people . . . I think they want to believe in people. And because of that, you can easily convince, with or without convincing words.”

Child molesters are skilled at deception because, in part, they have considerable practice at lying to their families, their victims, their friends, and to themselves. Anna Salter describes the abilities of molesters to lie convincingly in this way: “You are never going to run into a child molester who is not a practiced liar, even if he is not a natural one.”

Not only are child molesters skilled at lying to pastors and parishioners alike, they are often proud of their abilities to fool the leaders and members of their congregations.

“Many child molesters,” writes Victor Vieth, “put a great deal of time and thought into selecting the children they will violate. There are two reasons for this. First, sex offenders often look for the easiest target. Second, sex offenders often look for the child or children least likely to be believed should he or she disclose the abuse.” An offender convicted of sexually abusing children at church was asked how he selected his victims. He icily responded:

“First of all you start the grooming process from day one…the children that you’re interested in…You find a child you might be attracted to…You maybe look at a kid that doesn’t have a father image at home, or a father that cares about them…If you’ve got a group of 25 kids, you might find 9 that are appealing…then you start looking at their family backgrounds. You find out all you can…which ones are the most accessible…you get it down to one that is the easiest target, and that’s the one you do.”

Based on her experience with child sexual abusers, Anna Salter concludes: “Child molesters are very professional at what they do and they do a good job at it.”

Because of this reality, parents need to be smarter and better prepared than those who would want to harm their child. 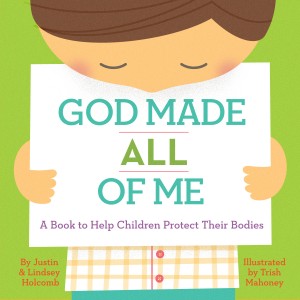 Get out new children’s book God Made All of Me: A Book to Help Children Protect Their Bodies.