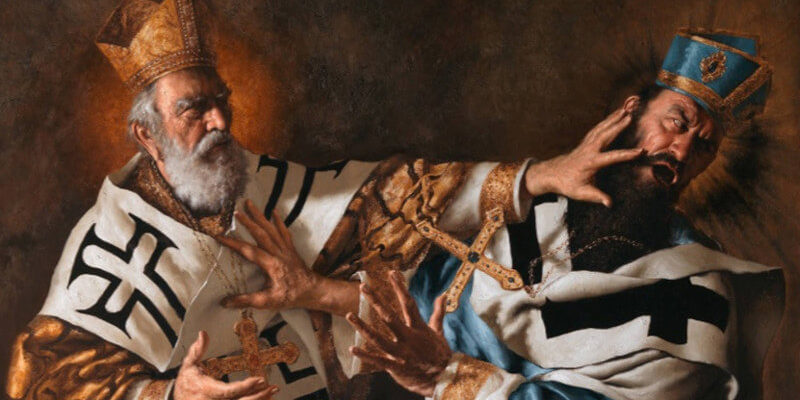 Arianism: Its Teaching and Rebuttal

Sudden chaos overtook Alexandria in 318. A riot broke out and people streamed into the street chanting, “There was a time when Christ was not!”

The slogan expressed an idea that had become popular: that Christ was a created being. But that idea was opposed by another group of Christians, led by Bishop Alexander of Alexandria and his protégé, Athanasius. They insisted that Christ is eternally divine along with the Father.

What caused this crisis? The teachings of a Libyan priest in Alexandria named Arius.

Since part of Arius’s responsibility as presbyter was to direct a school of biblical interpretation for priests and laypersons who wished to teach, his theories quickly gained traction with the next generation of Christian leaders. Over time he began to openly criticize Alexander, bishop of Alexandria. Alexander has been described in history as a gentle and tolerant soul who did not relish conflicts. Nevertheless, the bishop took the field against Arius and insisted that the Son is just as much God as the Father. Arius then accused Alexander of being sympathetic to Sabellius’s Modalism.

Arius was not trying to stir division or start a crisis. He thought that the relationship between God and Jesus was simple and needed to be freed from overly complicated explanation. After all, “Trinity” was not a common term at the time, and it had not yet been precisely defined. The word “Trinity” is not found in Scripture (it was first used by Tertullian), and it is best described as shorthand for all the teachings of Scripture on the nature of God.

Since the age of the apostles, Jesus had always been considered divine in some sense. But his precise relationship to the Father had not yet been articulated.

Yet the church still had an unspoken sense of what the Trinity isn’t. This was why Sabellius was rejected for teaching that God is sometimes the Father, at other times the Son, and then at another time the Spirit, but never all at once. That’s Modalism. Adoptionism was rejected, because it taught that Jesus started out as a mere man who was “adopted” by God to become the Son of God. Those early explanations were deemed incompatible with Scripture and therefore heresies.

Arius advanced the argument that the Son is not coeternal with the Father but is the supreme creation. He argued: “If the Logos is divine in the same sense that God the Father is divine, then God’s nature would be changed by the human life of Jesus in time and God would have suffered in him.” The implication that God changes and suffers seemed blasphemous! So it must be then, Arius concluded, that only God the Father is without beginning. The Son came into existence—as the first thing created—through the will of the Father.

Arius argued that the Son was created before the rest of creation. He is not coeternal with the Father. As he put it, “Before he was begotten or created or appointed or established, he did not exist; for he was not unbegotten.” Further, Arius believed the Son is not of one divine substance with the Father. He is rather of a similar substance with the Father (Greek homoiousios). On this view, the divine qualities of the Son are derivative (contingent, not essential), given to the Son by the Father. As Arius described Jesus, “He is not God truly, but by participation in grace . . . He too is called God in name only.”

Arianism caught the attention of Emperor Constantine. Fearing that the church’s discord might fracture the empire, he called the Council of Nicaea (325), attended by 318 bishops, to resolve the situation. After dramatic debates, the vast majority stood with Alexander and condemned Arianism. Only two others were exiled with Arius, so it was virtually unanimous.

We have the Nicene Creed due to this controversy. The majority in the council of Nicea condemned Arianism. They added to the Apostle’s Creed precise wording to clearly denounce Arianism with the following:  “We believe … in one Lord Jesus Christ, the Son of God, begotten from the Father [only-begotten; that is, of the essence of the Father, God of God], Light of Light, very God of very God, begotten not made, being of one substance [homoousious] with the Father . . .”

They adopted the term homoousious, meaning, “of the same substance,” to describe the Son’s relation to the Father. This horrified the Arians, but the orthodox bishops, such as Alexander and his young protege Athanasius, were overjoyed. However, even this council could not quell the rising popularity of Arianism. In fact, the council served as a catalyst for it to grow even more rapidly! So much so that Constantine began to doubt the wording of the Nicene Creed and thought about rewriting it in favor of Arianism. One man stood in his way: Athanasius (ca. 296 – 373).

The torch passed on from Alexander to Athanasius to defend orthodoxy even when it was starting to become unpopular. Elected as the new Bishop of Alexandria in 328, Athanasius found it appalling that Arius insisted that the Son is a creature.

To Athanasius, this was no small matter. The difference between homoousious and homoiousious made all the difference in the world in understanding how the Father relates to the Son.

According to Athanasius, the Son was eternally begotten from the Father such that he can be said to be of the same essence (homoousios) with the Father. Why the precise wording? Because, as Athanasius argued in On the Incarnation, salvation itself hung in the balance. The Bible’s teaching on Christ’s atonement requires a mediator who is fully God, with the holiness to make a perfect offering for sin, and also fully human, one who truly represents those to be reconciled to God. Salvation depend on Christ’s being God, not “like God.” He still insisted only God can save humanity. The essentials to the gospel remained: Jesus Christ must be truly God and truly human in order to be the perfect mediator.

No creature can cancel the power of sin and death and offer eternal life to other creatures. Only the Creator can do this. So Athanasius argued that Arianism makes salvation impossible, because—no matter how high his status—the Son is still only a creature.

As fourth-century theologian and archbishop Gregory of Nazianzus famously put it, “That which was not assumed is not healed, but that which is united to God is saved.” Gregory understood that what we believe about Christ is directly connected to what we believe about salvation. Gregory argued that Jesus Christ must be fully human if he were to be the mediator between God and men, Athanasius argued that Jesus must be fully divine. There is an intimate connection between the salvation of humanity and the deity of Christ. Even though some sects like the Jehovah’s Witnesses still repeat elements of Arian teaching, Jesus claimed to be God, and the Christian tradition has maintained Athanasius’s argument that the deity of Christ is necessary for salvation.

All this controversy caused Arianism to grow more rapidly, so much that Constantine just wanting the matter to be done and not concerned about fidelity to the strict wording of Nicaea, restored Arius.  He required Arius to submit in principle to the creed, which he did, though Athanasius and others believed he was lying and stood in his way.

Athanasius was exiled five times for defending Nicene orthodoxy. In 46 years as bishop, he spent only 17 in Alexandria. But he remained faithful, even though he was up against what seemed like the entire world. Today he is recognized as the foremost defender of Nicene orthodoxy and the most prolific writer of Trinitarian theology in the fourth century.

Athanasius’s exile helped bring back momentum for orthodoxy. Not only was Athanasius building up a network of support in the West but the church in Alexandria refused to replace Athanasius. So he was still technically a bishop.

We are saved from God by God. Only a divine Savior can bear the weight of God’s wrath in atonement. Only Jesus as the God-man can satisfy the enormous debt and penalty caused by human sin against God. No mere human could bridge that gap. Only a divine Savior can pay the costly price for redeeming us from our bondage to sin and death. Only the God-man can conquer all his people’s enemies. Our salvation is dependent on the infinite divine capacity of our Savior, Jesus Christ.

If the early Christians had lost their nerve and conceded the “lesser divinity” of Jesus, then the work of God in Christ for our salvation would have been rendered meaningless. No mere man, nor half god, could possibly intervene to save fallen and sinful humanity, let alone restore all of creation. Only the Creator can enter creation to fix its brokenness and redeem its original purpose. Only the Creator can recreate. Only the Maker can remake. Only God can save us from our sins.

Because the Father and the Son are one substance, we can also be assured that we actually know God in Jesus Christ. After all, “The Son is the radiance of God’s glory and the exact representation of his being” (Heb. 1:3), and so when we look on Jesus, we look on God.

Without confidence that Jesus is God, united in substance with the Father, we could not be sure that Jesus can speak for God, forgive sins for God, declare righteousness for God, or do anything to make us children of the Father.

For more on this, check out Know the Heretics and Know the Creeds and Councils.