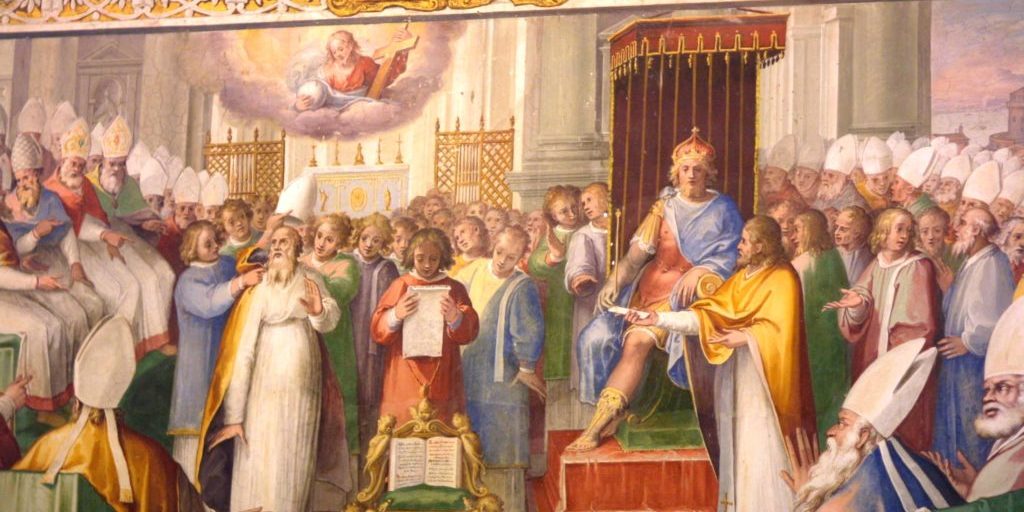 Why Study Heresies, Creeds, and Councils?

Following the apostles, the early church maintained that heresy means directly denying the central orthodox beliefs of the church. Early church creedal statements codified orthodoxy into a widely accepted form. Even before important Christian beliefs such as the canon of Scripture (list of books in the Bible) and the Trinity had been carefully articulated, the mainstream of Christian believers and leaders had a sense of the essential truths that had been handed down from the apostles and the prophets, and passed along to each generation of Christians through Scripture, sermons, and baptismal creeds.

Heresy and the Early Church

Before the developments at Nicaea and Chalcedon regarding the proper beliefs about the Trinity and the dual natures of Christ, the early church possessed what is known as the “rule of faith.” Bruce Demarest writes,

“The early church defended itself against heretical teaching by appealing to ‘the rule of faith’ or ‘the rule of truth’, which were brief summaries of essential Christian truths … The fluid ‘rule of faith’ gave way to more precise instruments for refuting heresies and defining faith, namely, creedal formulations such as the Apostles’ Creed, the Nicene Creed, the Definition of Chalcedon and the Athanasian Creed.”

The New Testament speaks frequently about false teaching and doctrine. For the early church, heresy was merely teaching that stood in contrast to the right belief received from the prophets and the apostles in the Scriptures and put into written formulas in the rule of faith and the creeds. The early church formed an accepted and received statement of what is true and essential to the Christian faith. The rule of faith gave birth to more precise statements of the essentials of the faith, such as the Apostles’ Creed and the Nicene Creed. These widely accepted formulations of the essential “right doctrine” (orthodoxy) handed down from the apostles were crucial for combating heresy.

Creeds and confessions are tools that the church has used to speak about God clearly and faithfully, to guide its members closer to God, and sometimes to distinguish authentic Christianity from the innovations, heresies, and false teachings that the New Testament warns of. While their purposes differ, all try to communicate complex theological ideas to people who don’t have sophisticated theological backgrounds (in some cases, to people who are illiterate).

The creeds are the boundaries of the faith that separate orthodoxy from heresy, while the confessions color in the picture, tying theology to everyday life in all sorts of ways. Because creeds are bare-bones structures (the outlines of the sketch), it makes sense that the earliest statements of the church are creeds, while later statements of particular denominations are confessions. Creeds distinguish orthodoxy from heresy (or Christian faith from non-Christian faith). Confessions distinguish denominational distinctives (or one type of Christian faith from another type of Christian faith).

It is important to note that the early church did not consider every potential wrong belief to be heretical. Rather, only those beliefs that contradicted the essential elements of the faith were to be labeled heresy, not disagreements on nonessential doctrines.

Unlike some churches today, the early church did not stipulate all of the minor beliefs that its members should hold, nor did it consider mere disagreement to be heresy. Significant leaders in the early church wrote about heresy as a corruption of right doctrine rather than merely an alternative point of view:

Why Do We Need to Learn about Heresy?

Core Christian doctrines such as the Trinity, the nature of Christ, and which books should be included in Scripture were developed through the early church’s struggles with heresy. When teachers began to lead movements that were blatantly opposed to the apostolic tradition, the church was forced to articulate the essential elements of the faith.

The history of heretics, heresies, and the orthodox leaders who responded to them can be disheartening. Why learn about arguments over what sometimes seems like theological minutiae? There are two major reasons. The first is that while there is certainly ambiguity in the Bible, the Creator of the world has decided to reveal himself to us and even to live with us. It is important to honor that revelation. When we find this revelation distasteful and try to reshape God according to our preferences, we are beginning to drift away from God as he really is. Imagine a friend who ignores the parts of you that he or she doesn’t like. Is that a deep relationship? Ambiguity or not, uncomfortable or not, it is vital that we are obedient to what we can know about God.

The second reason is related to the first. When we have a flawed image of God, we no longer relate to him in the same way. Think of the way that you might have related to your parents when you were growing up. Even if you didn’t necessarily understand the reasons behind boundaries they set for you in childhood, they look a lot different when you are confident in your parents’ love than when you fear or resent your parents. It is surprising how much our beliefs about God impact our daily lives, which is partly what makes theology such a rewarding (although difficult and dangerous) discipline.

It cannot be repeated enough that (as the old cliché goes) those who forget history are doomed to repeat it. Moreover, as C. S. Lewis warns, if we remain ignorant of the errors and triumphs of our history, we run the risk of what he calls “chronological snobbery,” the arrogant assumption that the values and beliefs of our own time have surpassed all that came before. Lewis writes,

We need intimate knowledge of the past. Not that the past has any magic about it, but because we cannot study the future, and yet need something to set against the present, to remind us that the basic assumptions have been quite different in different periods and that much which seems certain to the uneducated is merely temporary fashion. A man who has lived in many places is not likely to be deceived by the local errors of his native village; the scholar has lived in many times and is there- fore in some degree immune from the great cataract of nonsense that pours from the press and the microphone of his own age.

Learning how Christians throughout history have wrestled with the tough questions of our faith gives us a valuable perspective and keeps us from assuming that our own know-how, pat answers, or inspiring platitudes are best suited to solving the problems of the world.

For more on this topic, check out Know the Heretics and Know the Creeds and Councils.