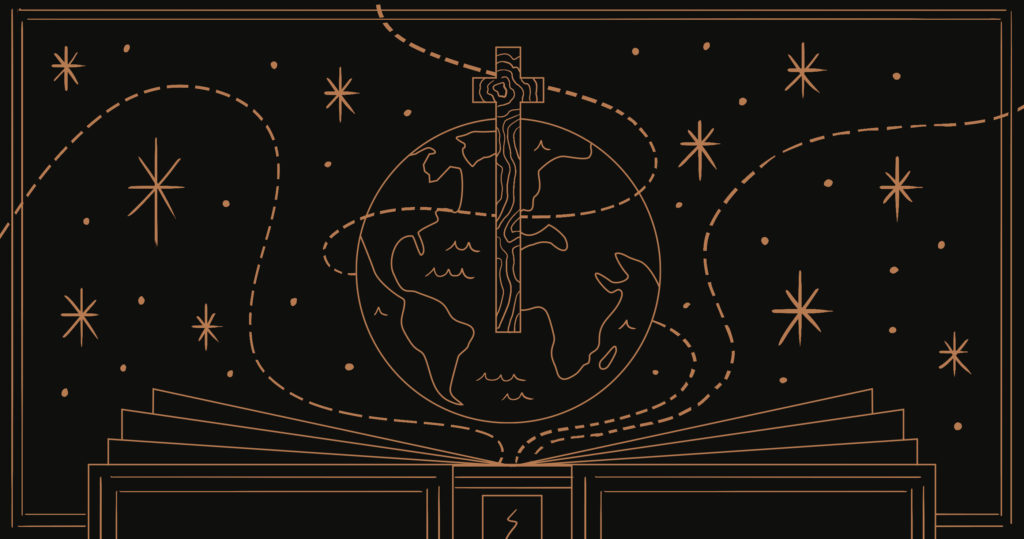 Acts is the story of God’s grace flooding out to the world, from the cross and resurrection of Jesus in Jerusalem to the ends of the earth. Nothing is more prominent in Acts than the spread of the gospel. Jesus promises a geographic expansion at the outset, and Acts follows the news of his death and resurrection as it spreads from Jerusalem to Judea, Samaria, and the faraway capital of Rome: “But you will receive power when the Holy Spirit has come upon you, and you will be my witnesses in Jerusalem and in all Judea and Samaria, and to the end of the earth” (Acts 1:8).

The first item in Jesus’s mind (post-resurrection) is that the apostles wait for the power of the Holy Spirit. This power leads to being a “witness” leading out from Jerusalem. The fact that Jesus notes Samaria shows that the gospel will transcend not just geography (Jerusalem and Judea), but ethnicity.

The primary task of the people of God is to bear witness to his great deeds. The first disciples were charged to bear witness to the risen Christ, who they had seen with their eyes. This witness would begin in Jerusalem, but would move outward to “the end of the earth” (Acts. 1:8). In these verses, Jesus does not command his disciples to perform certain rituals, to act according to certain rules, or to refrain from certain activities. He promises them that they would testify to his power when the Holy Spirit came upon them.

This is not a concept unique to Acts or the New Testament. God has always been concerned that his people reflect on what he has done and tell others about it. God’s people have always been primarily witnesses to his greatness. “I have redeemed you,” God says in Isaiah. “‘You are my witnesses,’ declares the Lord, ‘and my servant whom I have chosen, that you may know and believe me and understand that I am he’” (Isa. 43:1, 10).

Understanding the significance of the phrase “receive power” in Acts 1:8 requires that we reflected on the question that Jesus’s disciples posed in Acts 1:6: “Lord, will you at this time restore the kingdom to Israel?” The “kingdom” they were interested in was one of political and military power. During the time when these verses were written, the raw, physical power of the Romans had dominated the Jewish world for many decades. But Israel had been occupied before, and the last time a group of rebels had thrown out the invaders by force. The disciples wondered if Jesus was planning something just as heroic, something that would show themselves and the world the kind of stuff they were made of.

Fortunately, Jesus’s vision of power was of a different sort. They would “receive” power, but it wasn’t power for political dominance or military conflicts. It was the power of the Holy Spirit—God dwelling within them and transforming them. And part of this power meant being equipped to be witnesses (Acts 1:8).

The comfort of the power of the Holy Spirit is that it begins, not with our natural abilities, but with looking outside of ourselves. Just as a witness in a courtroom is most powerful when she is describing truthfully the events she has seen or heard, the followers of Jesus are given power to speak of the transformation that God works in them.

God is central to the gospel’s expansion. He is at the heart of the gospel message, the news that reconciliation with the Father is now possible through Jesus Christ. God the Holy Spirit is responsible for the growth of the church and its remarkable expansion.

In Acts, “grace” is a parallel for “the gospel” or “salvation.” Jesus’s message is summarized as “the word of his grace.” Believers are said to have received “grace” or to be “full of grace,” and they are challenged to continue in “grace.” The witnesses in Acts proclaim the grace of God, and it is through this grace that people are able to respond with faith.

Acts reveals God’s passionate pursuit of his people, beginning with his followers in Jerusalem, expanding to Samaria, then to the rest of the world. By the end of the book we see Paul living in Rome “proclaiming the kingdom of God and teaching about the Lord Jesus Christ with all boldness and without hindrance” (Acts 28:31).

The Gospel Goes Forth

The gospel’s expansion is the culmination of what God has been doing since the beginning. Luke consistently grounds salvation in the ancient purpose of God, which comes to fruition at God’s own initiative. This reveals God to be the great benefactor who pours out blessings on all people. Even the opportunity to repent is God’s gift.

In Acts, the gospel expands not through human strength, but through weakness, opposition, and persecution. Demonic forces, worldly powers and authorities, governmental opposition, language and cultural barriers, intense suffering and bloody persecution, unjust imprisonment, unbelief, internal disunity, and even shipwrecks and snakes all threaten to slow down the gospel’s advance. But opposition and suffering do not thwart the spread of Jesus’s grace; rather, they only fuel it.

Acts shows that the new Christian movement is not a fringe sect, but the culmination of God’s plan of redemption. What was seen only as shadows in the Old Testament God reveals finally and fully through Jesus Christ. The book of Acts does not primarily provide us with human patterns to emulate or avoid. Instead, it repeatedly calls us to reflect upon the work of God, fulfilled in Jesus Christ, establishing the church by the power of the Holy Spirit. We are invited to enter and participate in a story that is much bigger than we are.

All people are invited to receive the grace of God through one man, Jesus Christ. Jesus’s gospel goes out to all places and all types of people, because Jesus is Lord of all.

Justin S. Holcomb is the author of Acts: A 12-Week Study. This article first appeared on Crossway.org.