“What if education wasn’t first and foremost about what we know, but about what we love?  That is actually the wager of this book:  It is an invitation to re-vision Christian education as formative rather than just an informative project.” 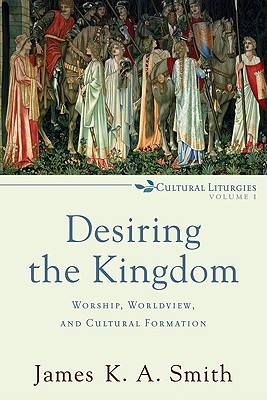 by James K. A. Smith

In Desiring the Kingdom, James K. A. Smith sets forth a vision of Christian formation that seeks to challenge preconceived notions of what education should be and the assumptions that undergird those conceptions.  He envisions his work being used by pastors, campus ministers, worship leaders, and others who are in charge of forming worship in local congregations.

Two assumptions shape the book and guide the discussion.  First, in part one, Smith contests one common understanding of human beings (anthropology) which sees them primarily as “knowing” individuals.  Instead Smith asks, “What if education wasn’t first and foremost about what we know, but about what we love?  That is actually the wager of this book:  It is an invitation to re-vision Christian education as formative rather than just an informative project.” (17-18).  Second, in part two, Smith challenges the idea that education or any other practice can be religiously “neutral,” and argues for an expansive understanding of “liturgy” as love shaping habits:  “The core claim of this book is that liturgies – whether “sacred” or “secular” – shape and constitute our identities by forming our most fundamental desires and our most basic attunement to the world.  In short, liturgies make us certain kinds of people, and what defines us is what we love” (25).

Chapter One outlines Smith’s theological anthropology.  In contrast to both “person-as-thinker” and “person-as believer” models of the human person, he articulates what he refers to as a “more robustly Augustinian anthropology” which “sees humans as most fundamentally oriented by love” (46).  Because humans are most properly defined by these loves and their pursuit, Christian education is best conceived as a set of practices that form and shape what a person desires.  Smith identifies several elements in the “person-as-lover” model:  “Human persons are intentional creatures whose fundamental way of ‘intending’ the world is love or desire. This love or desire—which is unconscious or noncognitive—is always aimed as some vision of the good life, some particular articulation of the kingdom. What primes us to be so oriented—and act accordingly—is a set of habits or dispositions that are formed in us through affective, bodily means, especially bodily practices, routines, or rituals that grab hold of our hearts through our imagination, which is closely lined to our bodily senses” (62-63).  This “person-as lover” model suggests an alternative set of assumptions that should shape Christian education and offers what Smith calls a “social imaginary view.”  Rather than focusing merely on the content of education and ignoring the practices by which this content is communicated (and the everyday activities with which it competes), Smith states that on the social imaginary view, the imagination takes place over the intellect. By implication this means first that humans are typically religious well before they develop a theology, and second that formative practices cannot be reduced into mere ideas, belief, or doctrines.  Practices, habits, and routines of worship and life shape who we are, what we love, and how we believe.  Finally, he emphasizes that this process is not merely one that people experience as individuals, but through relationships and institutions.

Therefore, and with this understanding of the human person in mind, in Chapter Two Smith argues that the church should address desires in order to channel them into a desire for God.  In order to describe how the church should do this he makes a distinction between “thick” (meaningful) and “thin” (mundane) practices.  Although this distinction may at times be somewhat blurry its purpose is to emphasize that “no habit or practice is neutral” (83).  Furthermore, it is important to remember that some practices that may superficially seem “thin” are in reality “thick.”  Research has shown that the way our “dispositions toward goals” become “habituated” in us is often automatic and unintentional, and therefore proper Christian education must appreciate that many of our loves are acquired unintentionally through everyday practices which we take for granted (85).  Therefore, Smith invokes the concept of “liturgy” in an innovative way.  He writes, “I want to ramp this up just one more notch and suggest that our thickest practices constitute and function as liturgies” (85). While we typically think of liturgies in terms of religious practice, Smith says that “some so-called secular rituals actually constitute liturgies” (86).  Smith defines liturgies as “species of practice” or “rituals of ultimate concern” which are “formative for identity,” “inculcate particular visions of the good life,” and “do so in a way that means to trump other ritual formations” (86).  The reason Smith thinks using the term liturgy is important is because it raises the stakes of what is taking place in our cultural practices and rituals.

In Chapter Three, Smith models what he refers to as a “cultural exegesis” of our secular rituals and practices.  This cultural exegesis involves asking “What vision of human flourishing is implicit in this or that practice? What does the good life look like as embedded in cultural rituals? What sort of person will I become after being immersed in this or that cultural liturgy?” (89).  Therefore, cultural exegesis, much like biblical apocalyptic literature, is a mode of “unmasking” or “unveiling the realities around us for what they really are” (92).  Smith’s hope is that “the shift of focus from ideas to practices, from beliefs to liturgy, will function as a methodological jolt that gets us into a position to see cultural practices and institutions in ways we’ve never seen them before” (92-93).  By way of example, he offers three liturgical analyses of cultural institutions by examining the mall, the stadium, and the modern university demonstrating that “implicit in their liturgies are visions of the kingdom—visions of human flourishing—that are antithetical to the biblical vision of shalom” (121). However, even these secular liturgies point to the fact that we are liturgical animals.  “Secular liturgies don’t create our desire; they point it, aim it, direct it to certain ends” (122).  Here Smith appeals to Calvin’s sensus divinitatis, which he suggests—differing from the popular interpretation—speaks of our proclivity towards worship (as opposed to theistic belief/knowledge).

Whereas Part One formed the theoretical groundwork for Smith’s argument, Part Two consists of his constructive task.  Chapter Four introduces this constructive account of Christian worship and formation by arguing for the primacy of sacramental worship over and against the communication of a particular worldview.  Smith claims that the anthropology of Part One demands not a “top-down, ideas first picture that prioritizes beliefs and doctrines (‘worldview’) but rather a bottom-up, practices-first model that prioritizes worship as a practice of desire” (136).  Eschewing what he asserts to be “dualistic” or “Gnostic” worship, he argues for a sacramental understanding of the world that resists the temptation to separate nature from grace (141).  Smith writes that “Aspects of the material world like bread and water are not “made” to be sacramental by some kind of magical divine fiat that transforms their created nature; rather, when they are taken up as sacraments in the context of worship, their ‘natural sacramentality’ is simply intensified and completed. So, too, worship is not some odd, extravagant, extra-human thing we do as an add-on to our earthly, physical, material nature; rather worship is the epiphany of the world” (143).  This sacramental leveling entails the twin temptations to marginalize the church or to minimize the significance of the liturgy of Christian worship, and both temptations ought to be resisted (148-9).  Finally, he points out that all Christian worship is “liturgical in the sense that it is governed by norms, draws on a tradition, includes bodily rituals or routines, and involves formative practices” (152).  The question is not whether we have a liturgy, but what the liturgy which we necessarily have says about who we are being shaped to be.

Chapter Five in Smith’s own words consists of the “heart of the book,” (131) and presents the best and most easily accessible summary of his constructive project. In this chapter, Smith exegetes what he understands to be the standard practices of the Christian liturgy:  The Christian Calendar, The Call to Worship, God’s Greeting and Mutual Greeting, Singing, The Reading of the Law, The Confession of Sin and Assurance of Pardon, Baptism, The Creed, Prayer, The Scripture and Sermon, Eucharist, Offering, and Sending as Witnesses.  In each case his purpose is to articulate how the presence or absence of the given aspect of the liturgy and the manner in which it is carried out will affect those who participate.  Finally, Smith concludes the chapter by considering that Christian worship entails a relatively brief portion of the week.  However, this reality can be moderated by the power of carefully attended Christian worship practices coupled with sensitivity to (and frequently avoidance of) the power of secular liturgies.  Additionally the power of corporate worship practices should be supplemented with habits of daily devotion that also take place in the context of families and other relationships along the lines of Bonhoeffer’s Life Together.

Finally, in Chapter 6 Smith outlines the implications of his project for the Christian University.  Returning to the his opening question, “What is education for?”, Smith now asks “What is a Christian college for?”  Whereas Christian universities are most commonly thought to provide a Christian perspective on the world to their students, according to Smith merely thinking “from a Christian perspective” often does little to transform practice.  So then what is the goal of Christian education? “Its goal, I’m suggesting, is the same goal of Christian worship: to form radical disciples of Jesus and citizens of the baptismal city who, communally, take up the creational task of being God’s image bearers, unfolding the cultural possibilities latent in creation—but doing so as empowered by the Spirit, following the example of Jesus’s cruciform cultural labor…In short, the task of Christian education needs to be reconnected to the thick practices of the church” (220).  Instead of speaking of “Christian colleges” Smith wishes that we would speak of “ecclesial colleges” and “ecclesial universities.”  In this way he wishes to express the notion that the university should be nourished by the heart of the church.  He sees this happening in at least three practical “monastic” ways.  First, he desires to reconnect the church with the chapel (as a mediating institution) and the classroom, thus making worship more directly connected with education.  Second, he wishes to reconnect the classroom with the dorm room and the neighborhood (as well as relationships between students and faculty outside of the classroom), hence avoiding the disconnect from “real life” relationships often experienced by college students.  Third he desires to reconnect the body and the mind, which would involve a pedagogy that is “liturgically informed,” thus enabling Christian education to be primarily concerned with formation and not just information.

By way of Summary, Smith makes three primary claims in this book:  first, we are liturgical animals formed by what we desire; second, some practices are thicker than others, carrying more formative weight; and third, Christianity is not fundamentally a worldview but rather what we believe and think grows out of what we do.